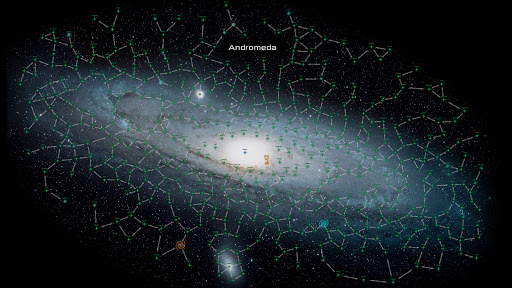 (Available in English Only!)
Andromeda isn’t like most other games, it has been slowly developed by one person for years now, and the direction it has taken has been constantly shaped by feedback and ideas from users to make it what it is today.
It is a constant work in progress.

It’s not super fast paced. You can’t really pick it up for an hour and get much out of it. It’s intended to be a digital universe in your pocket with its own virtual economy and a community of people that will probably be around for awhile.

To be clear though, it’s not an idle clicker game, it does take thought and strategy to succeed.

It is heavily economy oriented, with an emphasis on colonizing entire solar systems full of planets and building structures on them to generate resources over time, making it a bit of a mix of a 4X space game (Explore, Expand, Exploit, Exterminate), Universe Simulator, and a Tycoon game.

Fleet battles are 1v1, so while you can’t be in the same fight with a friend, you can help defend your friend’s territory from attacks by leaving your fleet in orbit over their planet.

The universe is persistent, so anything gained is kept, allowing you to build up a large interstellar empire over time.

* Play as an interstellar Corporation that warps to the safety of the Andromeda Galaxy to escape an alien invasion of Earth and The Milky Way.

* Build up an economy by constructing and upgrading habitats for workers, solar arrays for power, resorts for tourists, mines and refineries for metals, and much more.

* Hire a Stellar Representative that levels up and gains perk points that can be used to boost the efficiency all the planets in a solar system.

* Use the resources you’ve harvested from your planets to build ships and outfit them with weapons and support modules.

* Create colony ships to expand your Corporation to even more planets and moons.

* Terraform your planets to make them more habitable for your Workers and Tourists by altering the planet’s Temperature, Water Level and Pollution.

* Form fleets of up to 12 ships and retake Earth, Mars and the rest of Sol from the aliens known as “Strith”, or fight against other players and take their planets.

* Not into PvP? The game is fully playable without going into the open PvP areas, although you’d run out of content much faster.

* Trade with other players for credits, resources, ships, weapons and support modules, or use the Bazaar to leave orders to buy or sell resources while your offline.

* Form alliances with other players and work together.

Leave a fleet in orbit over a planet to protect it from other players while you’re away.
Ships automatically fire at targets with basic weapons like gattling guns and lasers.
Players have control over unique abilities such as Nuke, EMP, Prism Gel, Draw Fire, Focus Fire, Repair Beam and Shield Beam making fleet composition and strategy important.
Hire a Fleet Commander that levels up from fleet battles and gains points that can unlock perks that boost all the ships in their fleet.

Land Battles –
Build defenses on the surface of your planets as a second layer of defense against other players that takes a lot longer to destroy than a fleet.
Fill up troop transport ships and enter orbit of another player’s planet to land your troops and invade it.

* Only cosmetic or convenience perks for Micro-Transactions.
* Optional ads only.
* Uses the least invasive micro transaction system I can think of.
Micro-transactions can buy one thing: Time Crystals.
Time Crystals can be used to skip building and repair timers, painting ships, buying cosmetic holograms, or re-rolling resources on a planet slot.
Time crystals can also be occasionally obtained as in-game loot, or from a rewarded video ad.
Build Timers aren’t crazy long forcing you to buy time crystals either.

A video summary can be found here:

Lighting overhauled to be much darker and more realistic.
Text clickable on top bar and planet stats screen.
Comet gas effect improved.
Max zoom distances increased.
Quartz and Rhodium asteroids added.
PvP Shield saying 1 hour cooldown but having an 11 hour cooldown fixed.
Ads fixed.
Fleet commanders being assigned to multiple fleets fixed.
Audio bug fixed.
“Go to” button on the fleet screen fixed to go to the star the fleet is at instead of saying it’s not orbiting a planet.