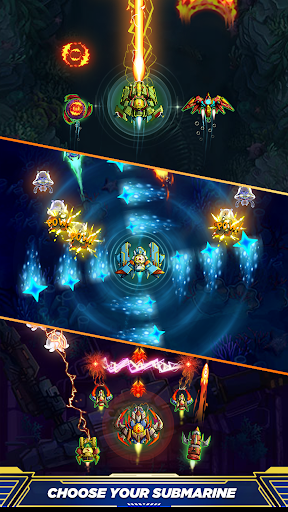 You are Earth’s last hope!
Entrusted with the most advanced submarines, your mission is to defend humanity against swarms of alien monsters emerged from the oceans.
Shower the enemies with rains of bullets while dodging their vicious attacks with your masterful maneuvers. Recover treasured technology from the lost civilization of Atlantis to power up your fleet. Discover the terrifying truth that is kept in the depth of Earth’s ocean while enjoying the colorful sceneries of the seven seas.
Are you ready to test your reflexes and shooting skills on this dangerous, breathtaking, action-packed adventure?

FEATURES:
Atlantis Invaders: Submarine Space Shooter is a new offline shooting game released in 2021 that combines classic action shoot ’em up gameplay with modern RPG and roguelike elements.
Made by the team that created many award-winning galaxy space shooters such as Sky Champ and SPACE SHOOTER; this offline shooting game will bring you countless hours of excitement with these features:
– Awesome submarines with unique attacks like in no other galaxy shooter games
– Hundreds of assault drones will help you in battles against the alien sea monsters
– Familiar classic arcade space shooter gameplay with new twists
– Interesting alien sea monsters and challenging mecha bosses in various hazardous environments.
– No internet required: play this alien shooting game offline and online anytime you like