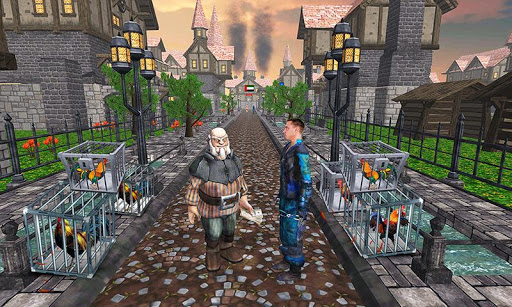 Farm Rooster Fighting: Angry Chicks Ring Fighter 2
Most exciting & fantastical adventure game of Farm rooster fighting with angry chicks in a ring fighting style. Let’s play this rooster fighting games 3d and participate in the rooster fighting tournament held between different countries, help you country Gallo to win the fight. This Farm Rooster Fighting: Angry Chicks Ring Fighter 2 is free 3d game; this is a best fighting rooster games with awesome Gallo fighter simulator 3d action game of 2019. Hope you really love this rooster fight between you country rooster and other country roosters. The game having multiple objectives to enjoy this you need to fulfill all the objectives below! Instruction given in the game play!
Objective 1: Go and Collect Money from Your Friend!
Objective 2: Buy A Car and Rooster Form the Dealer Using your Money
Objective 3: Choose the rooster of your opponent country if available and fight to earn and build your own farm.
Objective 4: Go to your developed rooster farm; choose your fighting farm rooster and Spin the Wheel to start fight with the other country rooster. You can choose your own country rooster!

🎋 Help the Rooster to Win the Fight

You’re the best player, let’s help the rooster to win in the rooster fighting game with your best and top trained fighter rooster of your country, you can change your country rooster & play as trained angry chicks with the enemy’s rooster and beat down enemy rooster in the ring. You need to fulfill different goals in the game or you can restart as new game and practice to achieve the goals within allotted time!
In this roosters’ ring fighting game prove yourself as a best of player of the game farm rooster fighting angry chicks ring fighter 2 and help your trained country rooster to the fight against the enemy’s angry rooster. Test your attacking skills on enemy fighting rooster and you should beat the enemies’ Gallo in this cock fighter game. You have best rooster, trained for fight to fight with the other countries roaster. The hero rooster is fully animated have jump and attack animation to beat the other roosters. Many people are there to see the performance of your Gallo fight.

WARNING
Please note this game is for fun and simulation purpose for our users, we are strongly against the Animals cruelty & unkindness.
Please send us your feedback and read our Privacy Policy. We are not getting any personal Information and don’t share anything with anyone! We are using some advertisement plugins that may use location info but you can deny all the permissions!