Hungry for a great mobile arcade game? Hero Rush: Adventure is made for brave tavern heroes and has got the full spread for you! Start off at the tavern with a band of mischiefs yearning for a fight: warlocks, magicians, elves, and other magical creatures.

Pick a hero and go on an adventure to a fantasy realm where you’ll fight hoards of monsters and acquire new skills and armor.

Hero Rush: Adventure is one of the most unpredictable adventure games that will keep you in shape for a long while. Are you a real hero of archery? Show us what you got!

GET READY FOR A NON-STOP ACTION GAME:

Explore New Realms
You’ll get to travel to mysterious new worlds with their unique landscapes and unexpected challenges.

Pick Your Heroes
Get other fantastic heroes to join your band of rascals and pick the best action hero for each strategy.

Fight Villains
From herds of monsters to epic Big Bosses — you’ll have no shortage of adversaries to fight these bow and arrow games.

Boost Skills and Armor
Pick up new tricks and weapons on the battlefield to upgrade or create entirely new armor sets for all kinds of heroes. Try to be an endless runner, test new weapons and strategies.

Push Boundaries
Craving a challenge in an action-adventure game? There is no shortage of difficulty levels with Hero Rush: Adventure. Get ready for more action!

Looking for a great boss battle game or exciting hero shooter? You found it! Become a brave hero and show your skills in this exciting action RPG – it’s your adventure time!
Weekend Boss invasion is almost here!
Invasion of mighty Fire Elemental marks the start of the new League season! Compete with other heroes to find out who will deal the most amounts of damage to this fire monstrosity.
This weekly event starts this Friday and lasts through the weekend.
This update also includes some bug fixes and quality of life improvements. 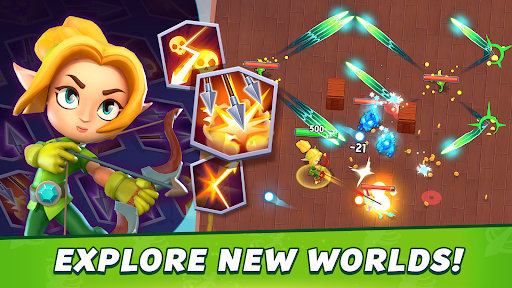