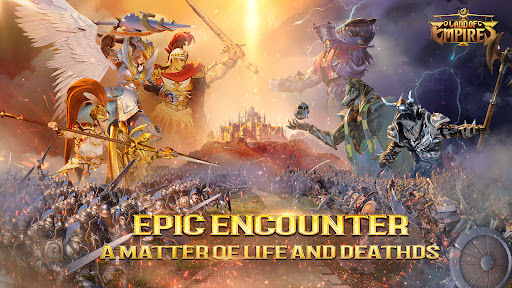 ⚔️Undead attack!⚔️
・ A black tide comes, reanimating the bones of the dead. The Undead are nibbling away at humanity’s final refuge, and your city could be next!
・ Gather what troops you have left and drive away the powerful Undead armies. Reclaim your territory and rebuild your city! Use strategy wisely to pull through this great peril, and lead your people in the fight to reclaim peace and glory!

⚔️Enlist powerful heroes to make you unstoppable!⚔️
・ Heroes of the past have returned to the mortal world to help repel the Undead! Valkyrie, Cleopatra, Caesar… recruit these fearless heroes to fight by your side and build an army the likes of which the world has never seen. This battle will determine the fate of humanity. The outcome lies in your hands!

⚔️Explore the expansive world map!⚔️
・ Dispatch troops on the world map to destroy Undead strongholds, rescue refugees, and find loot!
・ Treasure lies hidden in the mist deep within mountains and lakes. Probe these forgotten lands to earn tons of resources, relics and equipment to arm your city and your army! Development, expansion, and exploration never end!

⚔️Become a master strategist on epic fields of battle!⚔️
・ Research tech, announce the Codex, train advanced soldiers and craft a custom battle strategy for your heroes. Every decision you make will set the stage for victory.
・ Make full use of your strategic talents as you build your formation with Infantry, Archer and Cavalry troops. Each battle is fought in real-time, and the movie-grade battlefield scenes will awaken the heroism within you!

⚔️Fight alongside allies!⚔️
・ You do not fight alone! Form Alliances with other powerful lords and launch rally attacks to raid Undead territory and conquer the Throne. Unite with your allies in multiple social modes and epic rally battles to reform human civilization and claim the ultimate victory!

Facebook: https://www.facebook.com/LandofEmpiresTeam/
Discord: https://discord.gg/dW2C7FC
Newly Added:
1. The new event “Chaos of Hell” is now added to the game. Defend against the invasion of the Undead together with your Alliance in this event!
2. Lv.11 Units are now available. Governors with the Glorious Level of Barracks unlocked can train more powerful troops!
3. Random story events are added to the Hawk Watch