New fantasy idle afk butler for hardcore games fans. If you like casual tactical games, then Magic Siege – Castle Defender PRG – idle pve fantasy will be to your taste!

This is a fascinating world of medieval wars in pve mode. Unleash wars with the armies of enemy kingdoms, build your own castle and participate in battle games for supremacy in the empire. Download Magic Siege – Castle Defender and challenge yourself at the offline multiplayer role playing strategy game!

You are a powerful mage which defends its own castle from the waves of monsters. It will not be easy! You will need to use your tactical skills and the impressive quantity of magic skills and magic scrolls with different effects to kill all your enemies. Using the spell upgrade system, you will raise the might of your spells, to kill more powerful monsters.
The offline role-playing game Magic Siege – Castle Defender is a mobile tactical RPG in which the action takes place in the unique fantasy world of Magician battles in pve mode. The gameplay is concentrated in a single PVE campaign, however, the game contains pve elements, as well as rivalries between guilds, clans, as well as raids and dungeons for farm.

Innovative and classic: Detailed Fantasy World full of wonders, magic and dangers. PVE Campaign with an exciting storyline and detailed characters, exciting offline battles, and fantasy graphics. Build and upgrade your own castle, upgrade heroes and their army. Explore the mysterious kingdom and remember that only true Heroes will find beauty in the reflection of Beholder’s eyes.

Unlimited possibilities of customization: Pump over many heroes and hundreds of soldiers. The various unit’s skills tree allows you to try out numerous combinations and create countless unique strategies and tactics.

Real Confrontation: Random Opponent? Worthy opponent at one time? Not in our fantasy world. The guild system is designed for the gamers who seek struggling.

Equipment and loot do matter: High-quality armor is a rarity. An excellent blacksmith is worth its weight in gold, and his work costs a lot of money. You will have to try to collect at least one set of legendary equipment, but the world rating is worth the effort.

Awesome and different: Numerous detailed mobs – many different monsters. Each of them has its own set of abilities (skills) and battle tactics, each requires its own approach – hordes of bloodthirsty gnolls, fearsome dead and inveterate thugs and mercenaries.
— added new levels;
— added a new magic skills and scrolls;
— added easy gameplay mode;
— balance tweaks;
— added an option to show enemy scores;
— added speech and voices for Bosses;
— added gem drops for Robes and Staves;
— more detailed information about enemies and items. 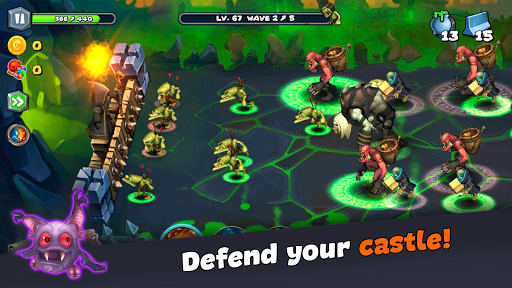