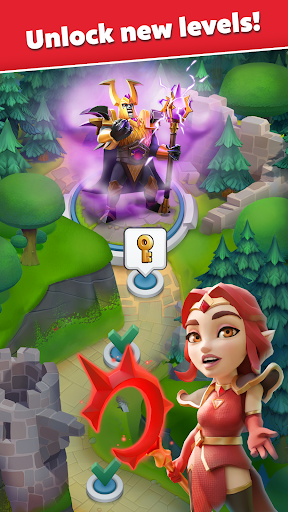 In Puzzle Breakers you’re about to join legendary PvP battles with real players, go on raids to fight incredible creatures and take part in clan wars. Fight against other players or monsters, summon epic heroes to participate in massive PvP battles.

This gem of a game has it all: use bold strategy to beat levels, level up your skills with magic, slay dragons, and defeat evil lords in legendary combat! Bring everything you’ve got to come out on top!

• Heroes
Summon legendary and epic heroes and create the strongest squad there is to crush the enemies.

• PvP online
Fight other players from all over the world in real-time.

• Raids
Joint clan raids on bosses and monsters. You will meet many creatures – dragons, scary trolls, and goblins. Who knows who else is waiting for you in the fantasy world of Puzzle Breakers.

• Campaign
Hundreds of levels will challenge you in the fields of dangerous battles. Exciting adventures await!

• Stunning 3D graphics
The design of the characters will steal a way to your heart.

It’s time to protect your kingdom. Summon legendary heroes into the best squad in the world. Win clan wars and fight against real players in pvp duels.
Hello friends! This Update brings major changes into the game:
– Revamped Hero upgrade system
– Core changes in the game balance
– New buildings and types of resources
– New in-game shops
– New events
– Graphic improvements
– Various fixes that will improve game stability
All the details are available in our Knowledge Base:
https://support.puzzle-breakers.com/hc/en-us/sections/360004671392
Our Discord: https://discord.gg/wwWGrcR