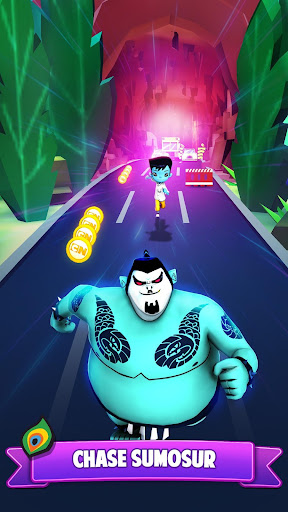 Kris is an intelligent and naughty kid who stays at an orphanage with his other friends. An Evil demon King, posing as principal Kanishk is out to create havoc in the school. He has an ulterior motive of taking over the world with his army of zombie demons. To save his friends and the school from annihilation, Kris prays to Lord Krishna and is blessed with superpowers. He also got a boon from Lord Krishna and that is how he can transform into a divine form which is like Lord Krishna.

This time Kanishk has summoned for Sumosur, the giant asura who has the strength of 100 elephants. Mighty earth-shattering kicks and catastrophic claps are his biggest superpowers. But Kris always wins despite the fact that Kanishk sends multiple asuras to finish him, and Sumosur is no exception. Follow Kris on an exciting and fascinating adventure in this RPG action game with casual gameplay and easy controls. Become the saviour of the world and win this battle against Kanishk’s evil minion, Sumosur.

Play Roll No. 21 – Run Kris Run, a new runner mobile game as Kris and chase the notorious Sumosur away. Run on the streets of Mathura and collect as many coins as you can. Slide through barriers. Jump over incoming cars and barricades or Swipe to avoid obstacles. Grab Magnets on the run to collect all the nearby coins. Seize the Body Armor and run through all the obstacles without taking any damage. Use Power Boots and boost up your speed and help Kris narrow down the distance between him and Sumosur. Collect easy coins during your Super Flight. Coins can be used to upgrade your Power-ups to last longer.

Use Hoverboards for free-run and glide through Mathura in style and give your run a Headstart or a Mega Headstart. While Kanishk keeps an eye on you throughout your run, Pick up Boss Fights with Sumosur in the Krishna Avatar and show him who’s the real boss.

Participate in daily challenges and earn extra rewards. Take up various missions and complete them to increase your XP multiplier. Collect Feather Tokens on the run and use them to revive when needed. Connect and play with your Facebook friends and challenge them to beat your high score.

FEATURES:
• EXPLORE the vibrant Mathura
• DODGE, JUMP, and SLIDE through obstacles
• Collect COINS, gather REWARDS and complete MISSIONS
• Use HEADSTART and MEGA-HEADSTART for higher scores
• Get free runs with HOVERBOARDS with Special Powerups
• Pick up BOSS FIGHTS with Sumosur in Lord Krishna Avatar
• Get Free Spins and earn Lucky Rewards with the SPIN WHEEL
• Accept the DAILY CHALLENGE to earn extra Rewards
• SCORE THE HIGHEST and beat your friends using exciting power-ups

So, if you’re looking for some fast, colourful arcade action, download Roll No. 21 – Run Kris Run and get hooked on the awesomeness!

– The game is also optimized for tablet devices.

– This game is completely free to download and play. However, some game items can be purchased with real money within the game. You can restrict in-app purchases in your store’s settings.
What if you’re attending a school that’s run by a demon principal? Well, if you’re Kris, you use your powers to stop any evil happenings. While Kris is out to deal with the earth-shattering Sumosur, one of Kanishk’s strongest minions, we optimized the game and kicked some bugs out for an effortless and fantastic gameplay experience. So, get on with the chase now. It’s masti time!