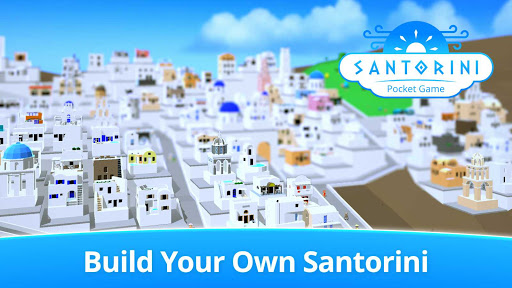 Take a trip to Santorini, the gem of the Aegean Sea and the world’s best resort!

Enjoy this ‘Resort Management Simulation’ game by building beautiful hotels and restaurants to create your vacation spots, as well as playing it as a healing & idle game, all the while enjoying the sea view.

Feel the beauty of Santorini through the game!
● Experience the beautiful villages and tourist attractions of Santorini
● Create your own style of Santorini village, a beautiful combination of white and blue
● Build hotels for increasing tourists and restaurants and shops for increasing revenue
● Acquire and upgrade over 200 different buildings and landmarks
● Upgrade airport and harbor for increased planes and cruise ship traffic
● Expand the village to unlock new buildings, villages, and tourist destinations
● Enjoy the beautiful music created by a Greek musician using traditional instrument

▶ We have tried to capture the essence and beauty of Santorini.
In order to bring the beauty of Santorini into the game, our team headed to Santorini. We walked an average of 16,000 steps daily for a week and worked diligently to observe the island’s details. While seeing major tourist destinations, landmarks, and beautiful scenery, we have captured photos and videos. With over 200,000 photos and video data collected, we were able to implement Santorini’s major tourist destinations, beautiful villages, and buildings as game content. We hope that you will be able to feel the beauty of Santorini with its bright sunshine and deep blue of ​​the Mediterranean Sea, wonderful caldera views, beautiful villages, landmarks, historic sites, museums, and colorful sandy beaches!

▶ Be sure to listen to music that moves with the winds of Santorini.
Our team have worked hard to express the beauty of Santorini to the fullest. We have sought out for a music that could convey our senses and emotions we were feeling. While exploring Santorini with this in mind, we came across Kleopas Thanasis serendipitously, a musician playing traditional Greek instruments in the small village of Pyrgos. His performances contained the beautiful melody and the mysterious sensibility of Santorini, which we were mesmerized by for some time while listening. We were able to get in touch with him and communicate about type of music theme we were looking for. After agreeing on a deal, we were able to get 10 beautiful songs through the email. We thank Kleopas Thanasis again for the great music.

*Santorini is an island formed by one of the volcanic eruptions in history and is a famous tourist destination in Greece in the Aegean Sea, located east of the Mediterranean Sea.

Connect the dots for kids 3.1