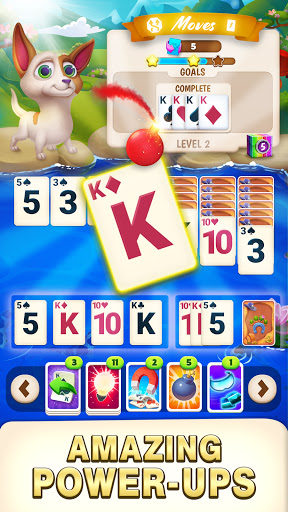 Ready for an adventure? Solitaire Pets Adventure is a unique free solitaire game that combines the classic solitaire klondike you all know with special casual missions and huge rewards! Rescue all the pets and win fun solitaire free games to complete your collectible series and win it all! Follow Ace the dog and his animal friends as they embark on a journey that anyone would love, whether you’re a cat person or a dog fan.

Playing klondike solitaire free of charge means enjoying a beloved classic card game. The fun card game, which is also known as “Patience”, dates back to the late 19th century (yeah, this free classic solitaire game is THAT old!).

How to play Solitaire Pets Adventure?

The tableau includes even piles with the first card laid face up and the last-placed face down. The game’s foundations comprise four piles on which an entire suit of cards should be built up. After you shuffle the cards, start dealing cards from the shuffled deck and choose seven cards out of a 52-card solitaire pack (excluding Jokers). Players of this free card game can draw and drag a card to form four stacks and reorder the card deck by suit, from Ace to King. The game is over when there are no more possible moves to make.

Like playing solitaire games free of charge? This classic cards game is just for you!

It’s showtime of Solitaire! Playing free solitaire card games is a wonderful way to relax after a busy day. Out of many card games, like Poker, 21 Blackjack, Spades, Royale, solitaire seems to be the most popular game.
Solitaire online game version, was first introduced to many players while being a core game in every PC operating system. Now you can find a free solitaire game for Android devices as well.

There are different versions of free solitaire card games, with the most popular being Klondike Solitaire. Other types of solitaire include Peg, Tripeaks, Spider & Mahjong Solitaire. Some versions in the solitaire collection are considered deluxe, others include a special cube, and some create an entirely new solitaire game.

Now, back to our awesome pet adventure! This is a fun solitaire classic game with features that are unique to the world of solitaire:

♠ Players of this single-player game are invited to complete daily missions and win amazing rewards!

♠ Surprise! Did you hear about our Surprise Cards? These appear at the beginning of each match and allow you to win boosters, pet toys, free tickets, and more. Play your inner patience card to win the game.

♠ The game includes an in-game mobile phone that allows players to collect apps and bonuses!
♠ Watch out from exploding cards!
♠ Play solitaire ad free and charge free! Solitaire no ads, no worries!
♠ Feeling blessed? The solitaire card game’s blessing cards that offer special benefits.
♠ Boost your card games for free with one of the many boosters that create an improved solitaire 2021 experience: Super Discharger, Hint, X-Ray, Air Strike, Tornado, Ace in the Base, Carrot Strike, Magnet, and more. The boosters will let you know which move to make next and remove obstacles.
♠ Become the solitaire king in no-time!

When playing this free solitaire card game, each solitaire win will grant you HUGE bonuses and grand prizes that hide in map boxes. When completing daily tasks in the cards games you will win tickets & golden coins to play card games for free. Most importantly, you’ll win hours of solitaire fun playing a classic solitaire free game that is like no other!

More from Come2Play - Board Games