Real City Traffic Rickshaw Game
Drive as a legend offroad tuk tuk driver and complete your task within time complete the level and i am sure you will crazy about the next level of this tuk-tuk rickshaw game. The extreme real Ching chi rickshaw 2021 game is about transport the people from one point to destinations by driving. So you need to park your rickshaw simulator in the right place and make the people happy. Being a offroad tuk tuk simulator real 3d rickshaw driver your duty is to autorickshaw driver on the safe point of view and transport passenger in the city area from one place to another. Enjoy a fun of mountain simulator and racing by transporting peoples in the city . In the city tuk tuk simulator there are many heavy traffic vehicles like coach bus and trucks and create difficulty for you. You will get a real experience of mountain offroad tuk-tuk drive and curve turns. Drifting auto rickshaw driving game and real tuk-tuk simulator. Don’t move steering wheel too much because this road is dangerous and Heavy Mountain so be careful and drive auto rickshaw drifting and pick the passenger and transport the safe place also you will enjoy the traditional music. This real drifting and Tuk tuk rickshaw driving game will bring the wonderful fun part in your entertaining time of life. Complete the challenging and defeat the other traffic and become an auto- rickshaw runner driver.
In this auto taxi rikshaw drifting driving simulator game some road barrier including the heavy hurdles at the starting point of the game. Different picking point is found in this real rickshaw game where tuk-tuk will have to stop and pick the passengers & ride in it. The different environment will make your interest more and various markets and shops are on the city roads. The environment of this game is very realistic. The fabulous music sounds are included in this game.
Auto Rickshaw Drive 2021
🔝 Feature of Auto Rickshaw Driving Game:
• Offraod challenge with curvy road
• Real auto rickshaw driving
• Different modern tuk tuk taxi rickshaw simulator
• Cloudy and snowing environment.
• Realistic gameplay
• Multiple camera angels
• Pick and drop passenger to the destination point
bugs fix 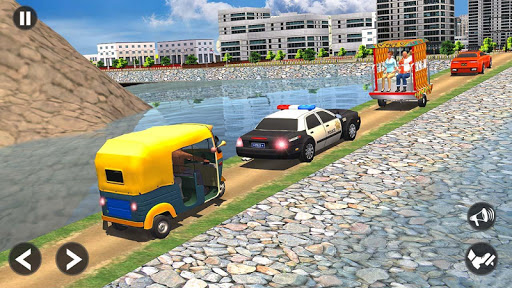