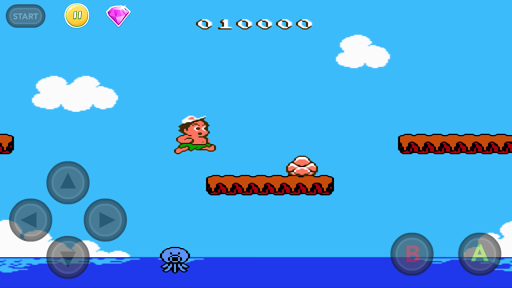 The player’s girlfriend is taken away by the aliens, and the player will summon the dinosaurs to start looking for his girlfriend.

There are four kinds of dragons in the game, red dragon, blue dragon, flying dragon and water dragon. Players can ride on them.

When the player takes the card from the egg, he can summon the corresponding dragon.The red dragon is represented by a red spades, which can swim on lava and breathe fire from its mouth.Blue dragons are represented by blue hearts. They are good at walking on ice without skidding and are easiest to find.Represented by purple plum blossoms, feilong was able to throw stones from his mouth, but it was the hardest to find.The water dragon is shown in a purple square and can be used in both land and sea environments.

Tap the start button in the upper left corner of the screen to start game.
Use Dpad to control the direction, press A to jump, press B to attack.