Game Information of Age of Frostfall 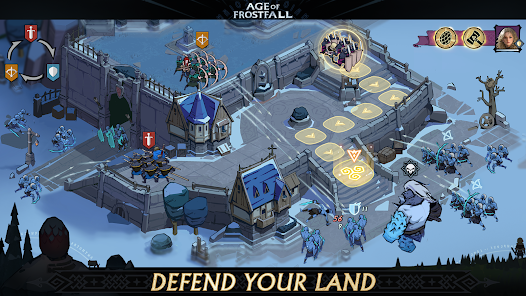 Winter is here, and with it have come the Unmelted, an unstoppable race of frozen monsters bent on exterminating all of humanity. Only you and your city stand between them and global domination, but you don’t have to fight alone.

Raise a dragon, build up your city, train a battle-hardened army, recruit legendary heroes, forge unbreakable alliances with your friends, and you can rise to become king of these harsh lands!

As lord of your own city, you’ll need to become a master of strategy, leading your army across both vast battlefields and in intense, small-scale fights to save every last house under your domain.

Unique RTS Tower Defense: Command teams of specialized troops to stop waves of fearsome Unmelted soldiers. Will you have what it takes to protect your homeland?

Mighty Dragons: Raise and bond with a dragon! Treat your dragon well and this fearsome, mysterious creature will reward you in kind. Will your dragon swoop in to aid your troops on the battlefield or help you build your city to new heights? The choice is yours!

Immersive World: The hell of war has never looked this good! Beautifully rendered HD graphics and vivid, icy landscapes will make you feel like you’re right there, leading your troops into battle against terrifying foes.

Rise from Nothing: Build yourself up from a lowly commoner fighting for survival into king of all the realm! Make friends from around the world and unite with them in alliances to dominate your kingdom together! It’s a dangerous world out there, but if you play it smart, you can rule over all of it!

Related Posts of Age of Frostfall