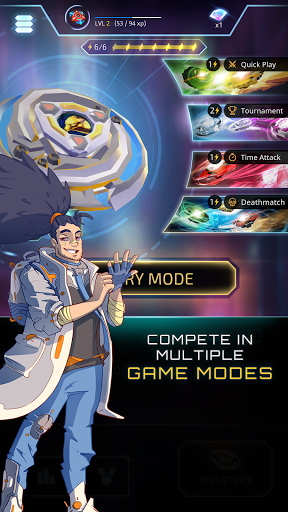 Fight your way to the top by unlocking new blade parts, leveling up your spirit animal, and perfecting your unique fighting style!
Become the best blade bouncer in this sequel to a belowed game.

Play through the all-new campaign “Story Mode” with the thrilling story arc, loving companions, and mysterious enemies:
– In addition to the standard way of playing, Blade Bouncer comes with a special “Story Mode” which consists of several missions designed to test your strength in brand new uniquely designed arenas.
– While in this story mode, you’ll meet many new characters such as Vince, Alvina, Chester, and nefarious Pharris.

Compete in 4 distinct game modes: 1v1 Battle, Time Attack, Tournament, and Deathmatch:
– 1v1 Quickplay Battle: Challenge a single opponent of similar skill and strength to the best of 3 matches. Whoever wins gets a unique reward to potentially improve their blade.
– Time Attack: There are several arenas designed to test your speed and precision, and you will have to check all the checkpoints before reaching the goal within a short period of time. Only the most skilled fighters can complete these!
– Tournament: Play against 7 opponents in series of best of 3 matches to get to the grand final. The winner gets the best reward and experience points to level up their spirit animals.
– Deathmatch: Much like the previous Blade Bouncer, you try to maneuver the arena and dodge and dispatch as many enemies as possible to survive the longest. Every passing second makes the challenge greater, but so are the potential rewards.

Use good timing and maneuver to dodge opponents’ attacks and hit them back with a deadly strike! You control your blade with a joystick that appears on the screen once you tap and hold anywhere. Tapping quickly will make your blade dash and deal bonus damage to enemies.

Acquire new blade parts and level up your spirit animal to become the strongest blade bouncer!
– Acquire unique bases, cores, blades, and seats for your blade. Each of these comes with a predefined set of bonus stats, but might also come in Gold, Platinum, or Mythic variant which boost your performance beyond limits!
– You can change how your blade looks through the new gallery page. There you can change any of the components of the blade, as well as the trail you leave when moving, or the dash attack visuals.
– Besides upgrading your blade, you can also upgrade your spirit animal by gaining experience from games and leveling up your animal through Talent Trees. Each animal comes with a unique playstyle and makes your blade truly yours.

Compete with friends and other bladers worldwide to become the best!

A quick-paced game optimized for a variety of different devices.