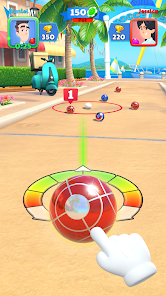 Play Bocce in bright and sunny places against other players!

Every Bocce stage offers a new challenge and a different strategy!

Lots of Bocce balls too collect, including: throw balls, precise balls, heavy balls and much more.

If you like to be competitive, you can play Bocce bowling against other players in the world in online multiplayer!

You can play against computer opponents to sharpen up your skills.