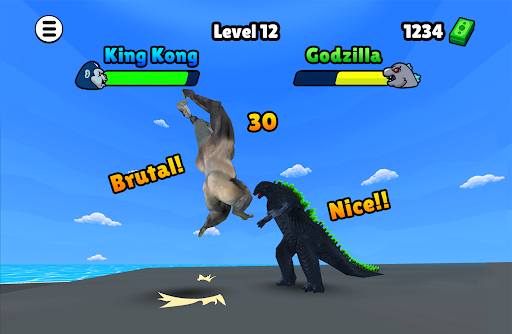 Godzilla is a giant monster that is rampaging through the city. You must mutate and evolve into a giant kingkong to fight with giant monsters.

Welcome to Godzilla vs Kong: Epic Kaiju Brawl! This is an epic animal run game where you can unleash your smashing skills and join in the Battle with Kaiju! You will experience the entire maturation process of Kong in the race to fight with the rampage Godzilla.

Feature of Godzilla vs Kong: Epic Kaiju Brawl:
– Lots of funny animal run games.
– Run, smash, crush!
– Develop your Giant KingKong!
– Stunning graphics along with the most realistic 3d image of Godzilla vs kong
– Collect money on the runway to become giant kaiju and have enough power to fight with epic rampage Godzilla.
– Incarnate as many Marvel characters to fight with the rampage Godzilla
– You have to smash the obstacle course and bring the adventurous Giant and Rush on Godzilla.
– Addictive Bonus Level: Smash with a giant hammer.

Catch the top trend by downloading Godzilla vs Kong: Epic Kaiju Brawl – a top trending game now. Don’t forget to invite more of your friends to play this epic Godzilla vs kong brawl. We are looking forward to getting feedback from all of you! Please leave your reviews, so we can keep making the game even better!
+ Improve the user experience
+ Minor bugs have been fixed
Have fun!