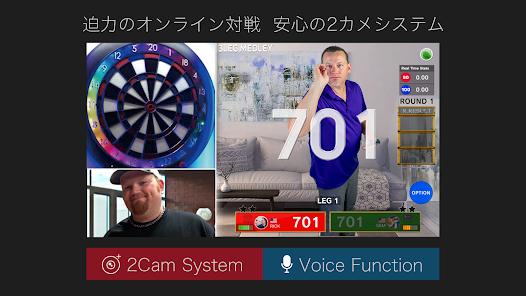 ■Up to 4 People Player
Experience the uncharted way to enjoy the darts game with a beautiful screen of your tablet. You would be able to have fun with your friends and even yourself.
You can play 01 and CRICKET for battles, COUNT-UP for a practice and a bunch of party games which is enjoyable up to 4 people.

■The Greatest Users Are Gathered to GRAN ONLINE
GRAN ONLINE is added at it’s ver.3 and it makes it possible to battle online with the players from all over the world while staying at home!

■Perform the Game with Real Award Video and Powerful Sounds
A powerful award video will appear on the full screen at high scores and it makes the game even more exciting.
LowTon / HatTrick / HighTon / 3 in a Bed / Ton80 / WhiteHorse / 3 in the Black

■Variety of Game Options for Advanced Users
Advanced users can explore a lot of option such as CORK on match mode, separate bull, double-in/out and master-in/out.

■Manage Play Data on the Server
It automatically saves your game result on the server. The game stats, the highest score, the average score, and the award count can be managed on the server. It shows in charts and graphs so that you can easily check your play data. Five players’ data can be managed separately. When your rank is up, the emblem on the top page will be upgraded.

■Connect with Friends
You can manage your play data after register for GRAN ID. In addition, you can invite friends to MY FRIEND and compete for the rank by the score with them. You would be advanced by competing over and over with friends!

■Global Ranking
In addition to MY FRIEND ranking, it also corresponds to country ranking and global rankings.

■Customize Feature
You can easily customize wallpaper, award videos and sound of darts hit. Go ahead and download themes from the server, so you can use new themes without updating the application.

■ NEW Games Are Added One After Another in The Update
Fun is endless. New games such as practice games, party games, etc. will be automatically added for each update.

Devices with less than 2GB of installed memory and Intel CPUs is not supported. Please be forewarned.