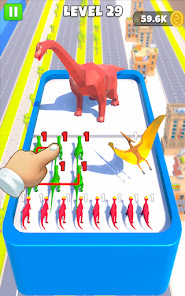 Merge Master: Dinosaur Fusion is a cool real-time strategy game for everyone. You need to think fast to beat all the enemies by combing your dinosaurs on your battlefield. Combine quickly and actively attack enemies to gain control of enemy positions and possess greater power than the opponent. At the same time, use your strategy and tactics to win the battle.

Grow your dinosaurs from simple velociraptors to terrific monsters when you merge them. Use your finger to draw the right combination and evolve your monsters. The higher the level of the monster, the stronger the attack and defense. Remember, if you don’t merge them fast enough, your enemies will beat you in the final round fight. Merge your army as fast as you can because the monsters will get stronger after each level.
Unlock new stronger characters. Only 1% of players can unlock all to win. Are you ready to fight in this drawing challenge?