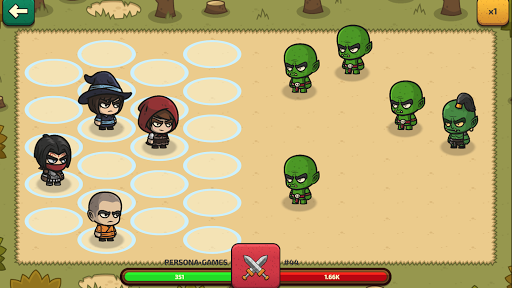 What do you like more: to be an assassin or a knight, a king or a robber archer like Robin Hood, a ninja or a pirate?
Now you do not need to choose! Gather a band of all of them and start a dangerous raid against the mysterious evil!

You are a glorious general of a great kingdom. The King asks to clear the forest road from the robbers. But our army discovered strange marks of the devil, and now we need to shed light on this mystery. We are starting a raid against the mysterious evil. Will we come back as legends and fetch rewards or turn into walking zombies in an army of evil?
The state of survival time has come! Gather the best army of heroes in the kingdom and win a war!
Clear every township of zombies, pirates, goblins and other evil spirits. Crush them all!

– Choose a hero you like more: knight, ninja, archer and even king!
– Explore and improve artifacts: knives, swords, bow and arrow, even Bible (why not?).
– Clash you band of heroes with the army of zombies, rogues, orcs, pirates and assassin.
– Defend you township from other players.
– Develop and protect a castle in your township.
– Choose a target and attack a castle of another player.
– Clash you hero band with the squads of other players in the player vs player (pvp) arena and become a champion!
– The story about the big war consists of 3 episodes. Each episode is full of interesting story twists.
– Fetch rewards and tap tap tap to upgrade your knight, assassin or another hero. They are already not idle heroes, they are legends of the arena! 😉

The new free landscape castle game Raid Heroes: Sword And Magic will give unforgettable emotions during exciting battles.
You can feel like a real land lord or army leader and show your tactical skills.
This is the incredible mix of rpg, strategy and idle heroes games.

Do not read legends of hero wars but become a part of these legends!
This is a game you wish!
Enjoy!
v.2.2.0:
– If you can add heroes to the defense squad, the SQUAD button in the Arena is now marked with a red marker.
– The new matchmaking algorithm in the Arena. The power of squads is taken into account now.
– The new formula for calculating squad power to more accurately reflect actual squad strength.
– Free Chest fixed. Now it is available for video ad again.
– Teleportation animation fix.
– Crashing in Clan War event fixed.