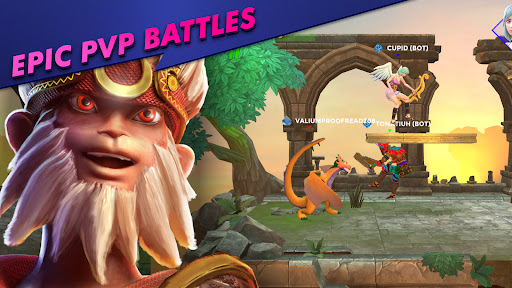 Rumble Arena is the first multiplayer brawling game for mobile; brawl with your friends and smash your opponent off the battleground to become a true legend.

~ ? MULTIPLAYER BRAWLING ? ~
Rumble Arena is a brawling game with players from all over the world. Join the fight on one of our 5 servers around the globe. Matches are fair and fluent thanks to advanced hit detection and input syncing!

~ ? UNIQUE HEROES ?~
Dive into battle with one of our heroes! All heroes have their own unique attacks and special moves and represent different corners of the galaxy!

~ ? DYNAMIC FIGHTS ? ~
Up to 8 heroes can duke it out in the arena. Survive the chaotic brawl by using acrobatic manoeuvres and surprise your opponent with amazing attack combo’s to become the last hero standing.

~ ?️ EPIC ARENAS ?️ ~
Brawl in several arenas and all with a different layout. Chaotic small or immensely big, all empower a different fighting style.

~ ?️ Training mode ?️ ~
Explore every attack in the “Training” mode and hone your skills to dominate in the multiplayer mode.