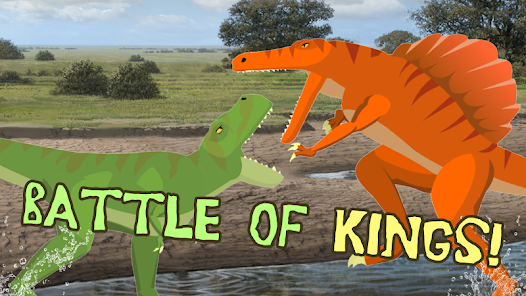 The T-Rex is once again rampaging thru the park of Jurassic and Cretaceous Park Dinosaur era! The Tyrannosaurus now arrived in a river of Cretaceous era. Here he met his long time rival, the mighty Spinosaurus, a dinosaur king, largest of all land carnivores.

Spinosaurus is a very powerful dinosaur carnivore. Their large size matters. They primarily feed on fishes, but they are not afraid to compete with another dinosaurs such as T-Rex, Giganotosaurus or large crocodilian, Suchomimus and Deinosuchus!

The two king of dinosaurus is going to fight each other in a dinosaur deathmatch! Who would win in this epic dinosaur hunting match? The king of land, Tyrannosaurus rex or the king of shallow water, Spinosaurus. Lets just play this awesome dino battle game, T-Rex vs Spinosaurus!